Which day is best for posting parcels ? 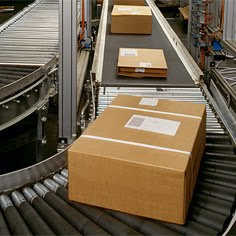 Is Monday the best day ?

- SHORT ANSWER : during the week ends sorting stations work at the posts and planes fly but Customs don't work; if the arrival country has a fast postal service, then THURSDAY is the best choice for posting parcels because these parcels take usually from 24 to 48 hrs before take off whatever the distance to the airport they are posted; and travelling in plane during the week-end is usually followed by an early arrival in the week ( Monday or Tuesday ) on the conveyor belt of the arrival country; on that condition parcels have a higher probability of being picked before the next week-end. ( ie : an arrival after the Wednesday may prevent the parcel from being picked up for delivery before the week-end ).


- LONG ANSWER : All parcels may be delayed by the Customs non working during the week end, whatever the day these parcels were posted : the rule is first out from the container first in the queue on a conveyor belt and all parcels picked from this conveyor for customs inspection will be delayed in the same way.
From this conveyor the sorting is done randomly. Assuming that the sorting is not done 24 hours and 7 days a week we want the parcel to queue as early as possible on the conveyor belt so it has the highest probability of being picked during working time : a parcel being on the conveyor as early as Monday morning has a higher chance of leaving the conveyor before Saturday than a parcel arriving on this conveyor a Wednesday for instance.

When to mail a parcel in Bangkok or at Phuket international airport so it can be on the conveyor belts abroad on Monday morning ? Assuming an average 48 hours in transport between Thailand and the destination country, Thursday or Friday should be the best days for posting your parcels. A small Parcel Air posted on a Thursday in Bangkok would arrive on the foreign conveyor on Sunday. With a fast postal service like in some European countries the parcel would typically stay in the sorting station 24 hours before being dispatched for delivery, taking 24 to 48 hours : it would be delivered luckily on Tuesday or most probably Wednesday. So the total time of travel from posting to delivery would be 6 days. With 1 more day delivery would be on Thursday, total 7 days. Would the parcel be diverted to the customs, the delivery would be delayed 48 hours, up to the Friday : total 8 days from posting to delivery.
A small parcel air posted on a Monday in Bangkok would be delivered luckily on Friday and typically on a Saturday in the same fast service : total 5 days. With 1 more day ( a more probable situation ) , delivery would be on Monday, total 7 days. But if it were directed to the customs, as they don't work on Saturday, with the average time spent of 48 hours the delivery would be necessarily postponed to Wednesday : total 9 days from posting to delivery.
Shipping small parcel air on Thursday seems the best option if we take in account the most typical situations instead of the luckiest : in a fast service 6 - 8 days versus the 7 - 9 days of the Monday posting.
But the average time in most counties is 10 - 12 days so that the parcels normally stay in the postal system over the week end; therefore the day of mailing does not matter : posted anytime from Monday to Saturday all small parcels air queuing on the conveyor belts will take 10 - 12 days to be delivered.

What about posting at Phuket International airport ?
EMS parcels from there take planes to Bangkok airport so they arrive at the sorting station of this airport faster than if carried from anywhere else in Bangkok and Thailand by truck.
Small air parcels are carried by trucks the day of posting if posted at Khok Kloi post office in our area before 15 : 30. When posted there, small air parcels take as much time as if they were posted in Bangkok : this is probably because what matters is the time of the registration at the post for loading the parcels on a plane, not the distance to the plane : queuing on a night truck or in a warehouse at Bangkok airport doesn't make any difference.

Hoya, Hoya seeds, Orchid seeds, Ferns, Fern spores and other plant collections are for sale on aleyagarden.com Plant care is available in various posts of this blog. Contact : aleyagarden@hotmail.com